What will you discover when you explore Arroyo Trails? 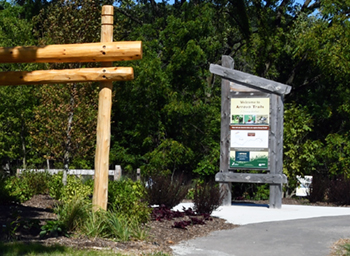 Arroyo Trails, A Discovery Woodlands, is a nature park development managed by the Channahon Park District, planned and funded by the People for Channahon Parks Foundation. Set on a truly unique 78-acres, the nature park is unlike any other, reintroducing children and families to nature and enriching life. Arroyo Trails offers numerous opportunities for outdoor play, fitness and education!

Location
Arroyo Trails is located North of U.S. Route 6 between the DuPage River and Bell Road, three miles west of I-55. Click here for map.

Arroyo Trails is ready for you to explore! 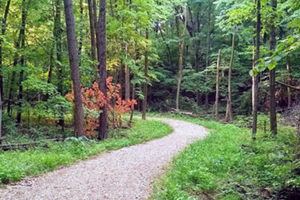 Constellation Trail
The Constellation Trail (formerly known as Exelon Generation Trail) is a unique crushed stone nearly one-mile (two miles out and back) trail that takes you along the ravine, winding creek and forest areas for kids and families to play and experience nature! You’ll discover beautiful overlooks, boardwalks and bridges, with sightings of white tailed deer, nestling birds, blue heron and more. Check out the trail map here. 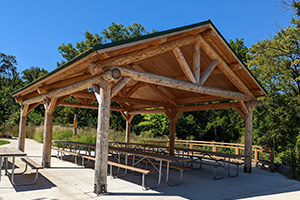 Cotter Pavilion
Located at the trailhead and overlooking the start of the trail, the rustic log pavilion is perfect for any type of gathering. 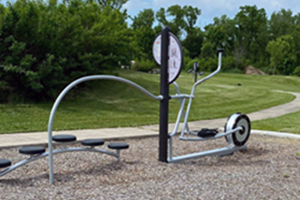 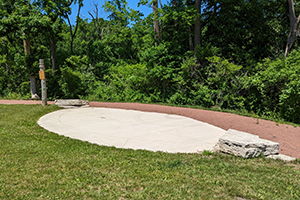 Aux Sable Outdoor Amphitheater Stage
An outdoor classroom/amphitheater with stage and boulder accents is a central location for groups to meet for education programs and theater productions. 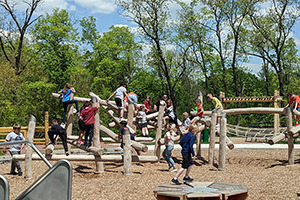 Log Climber
This unique wooden climber is made by Richter Spielgerate in Germany. Children have a natural urge to scale an obstacle or to climb up something. More than any other kind of exercise, climbing stimulates self-perception, promotes the ability to make decisions and to concentrate, trains spatial perception and supports self confidence. 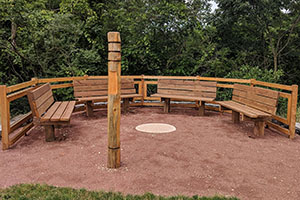 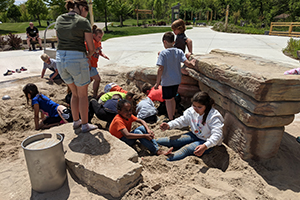 Water Play
The Water Play Area mimics a natural stream. The water is kid powered with a hand pump and push/pull structures.

StoryWalk signs are in! The first story will be posted soon!

What is a StoryWalk®?
A StoryWalk® is an innovative way to get people of all ages out walking while reading children’s picture books combining nature and physical activity with literacy. Pages of a book are transformed into signs that are then laid out on a trail inviting families, children, caregivers, teachers and others to follow the path of pages.

The Channahon Park District has been selected as a recipient of a $185,000 ReBuild Illinois Grant by State Senator Connor and former State Senator McGuire to build permanent restrooms at Arroyo Trails. 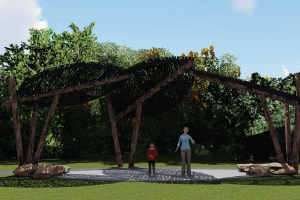 A unique band shell will be a new addition to Arroyo Trails where families, students, and groups can gather for concerts, events, family gatherings and more!
Seeking funding, estimated cost – $100,000

The boardwalk extension/covered bridge will be a beautiful addition and permanent solution to the trail washout happening near the trailhead.
Seeking funding, estimated cost – $150,000

How is Arroyo Trails funded?

Donors
The Foundation is extremely grateful to all of the companies and individuals who have supported Arroyo Trails! See our donors below.

Grants
PFCPF has also received a Recreational Trails Program (RTP) Grant from the Illinois Department of Natural Resources, and was a 2019 recipient of the competitive Park Development and Open Space Land Acquisition and Development (OSLAD) Grant.